The Core represents the main class - ProCamera2D.cs. It's a very simple class takes care of keeping track of all targets, knowing which axis to use (XY, XZ, YZ), how fast to move and, more importantly, it's the brain of all extensions and triggers. Here are the main features of the Core:

If your game has multiple characters or if you just want to follow that special missile while still keeping your player in sight just add another target (or as many as you want) to the camera and you’re done. ProCamera2D will find the average position of them taking in consideration their variable influences. Perfect for your Super Smash Bros. clone!

Sometimes you need your camera to be very fast on a certain axis and more fluid on another. Think platformers for example, you might want your camera to be less rigid when jumping. With ProCamera2D you can define the smoothness of the follow on each axis.

All ProCamera2D features (except parallax and pixel-perfect) work exactly the same either with a perspective (3D) or an orthographic (2D) camera. No special configuration required. Simply change your projection type and you’re done!

Are you building a platformer? A top-down racing game? A space simulator with a crazy camera setup? No worries, ProCamera2D has got you covered. With it’s multi-axis support you can use it on any kind of 2D & 2.5D game!

Also known as the Hitchcock effect, this method creates an amazing dramatic effect for the most intense moments on your game. Get creative!

As you can probably guess, this area is where you can drag your camera targets to. By dropping them inside this box they will be automatically added to the targets list below.

This list shows you all the targets that the camera is currently following. You can re-order the targets (although it makes no difference), delete or duplicate a target.

If this checkbox is enabled the camera will instantly move to the targets position when the game starts. For this to work the target needs to be already added. For centering targets added during runtime you should use the method Reset.

Choose which axis your game uses. If it’s a platformer you’ll probably stick to XY, but if it’s a top-down game you might be using XZ. Feel free to choose what fits you best. All features work exactly the same across all axes. Don’t forget to rotate the camera accordingly.

Choose when do you want the camera to update its position. Use FixedUpdate if your objects are moved using physics and stick to LateUpdate if you’re moving them outside the physics loop. If you’re using a mixture of both you’ll have to test both types and see what works best for you. If you want to use a custom timestep and need to manually update the camera movement, select ManualUpdate. This will require you to call the Move method on the core class and pass the desired timestep. Remember, if you’re getting a stuttering camera movement is probably because you’re using the wrong update type.

This option is only available when using a perspective camera. If enabled, the camera will zoom by changing the FOV instead of actually moving closer/further to/from the objects. Might look better on some cases, but on most it will cause some visual distortion above a certain threshold. Use with care.

In this section you control which extensions you want to have enabled for your camera. This section is here only as a quick way to add/remove components. You can still add/remove them manually like you would with any other component. See the user-guide for more information on each extension. 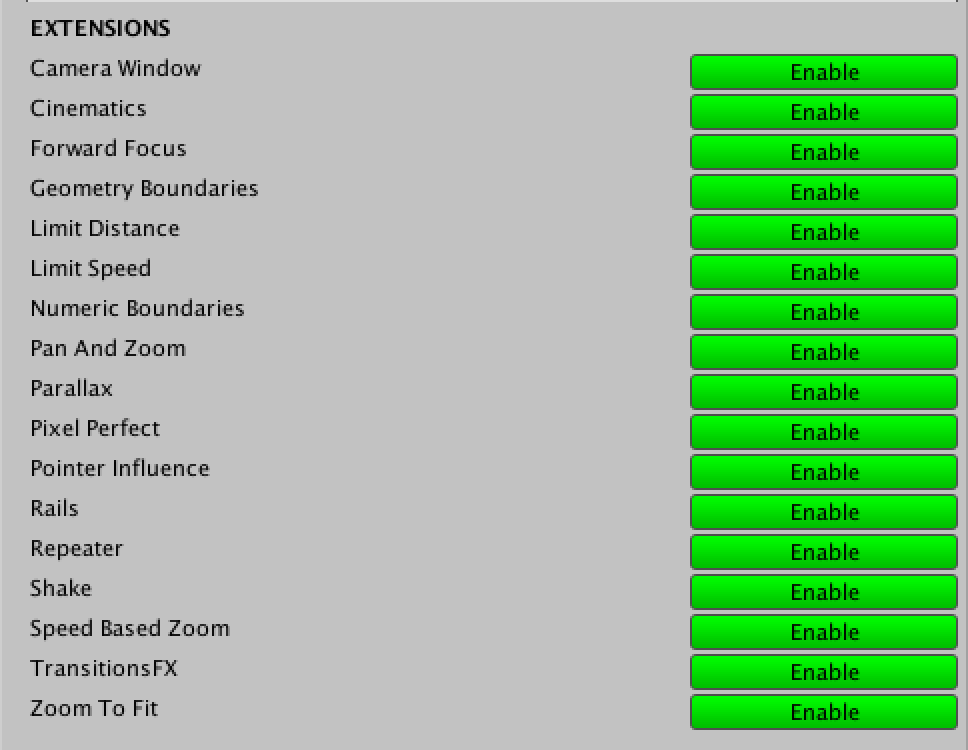 Use this section to add triggers and to navigate (on the scene view) to them. You can also see how many triggers of each type you have on the scene. See the user-guide for more information on each trigger.

Although you can accomplish almost everything with the ProCamera2D editor, you might feel the need to have a more precise control or even change some parameters during runtime. For that, you start by importing the ProCamera2D namespace, by putting the following code on the top of your class:

After that, all you have to do is access, from anywhere on your code, the ProCamera2D static instance. In the following example we add a camera target during runtime.

Through the static ProCamera2D instance you can change any public parameter and access the methods described below. Please notice that all extensions and triggers can also be accessed for runtime configuration but do not provide static instances, so you have to access them like you would any other standard Unity component.

This method is used by most extensions. What it does is simply applying the given influence to the camera during one frame.

This method is similar to the previous one but here you can pass an array of different influences and their respective durations.

Sometimes you’ll want to add some new camera targets during runtime. That’s where this method comes in.

Not much to tell about this one. Use it to stop following a target.

Gets the corresponding CameraTarget from an object’s transform.

If you want to manually adjust at runtime the size of the camera.

If you want to manually move the camera.

Resets the camera movement and size and also all of its extensions to their start values. It’s very useful to use, for example, when your character dies and spawns in a different position on screen.

Resets the camera size to the start value.

Resets all active extensions to their start values. Notice you can manually reset each extension using the "OnReset" method.

Instantly moves the camera to the targets' position.